Ubiquitous SMOG ?! MACROVITA protection in a cream against environmental pollution. 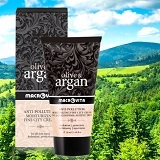 Environmental pollution must be rightly considered as an important source of cutaneous stress, although it is underestimated over the years now. The evolution of our lifestyles as well as the increasing urbanization during these past years amplify the risks, making pollution one of the major sources of concern for health and beauty. Cells, their lipid and protein components, but also their DNA, are the main targets of pollutants, generators of oxidation and inflammation. Dry skin, reactive and sensitive skin, acne and more particularly prematurity and accelerated ageing, are some of the well-known pollution consequences.

Unfortunately, the protective function of skin’s Stratum corneum is not unlimited and the prolonged and repetitive exposure to high levels of pollutants overtakes its natural defense capacity, until the barrier finally weakens and damages increase. If biologically stimulating the natural defenses is an answer to fight against pollution at long term, it is also possible to act immediately and physically, in order to increase the skin’s capacity of protection by applying a “breathing” shield, which will make a screen to prevent the penetration of pollutants like a second skin and, therefore, reduce the induced damages.

The anti-pollution effect of MACROVITA Olive & Argan Anti-pollution Moisturizing Fine City cream is based on a polysaccharide of high molecular weight obtained from biotechnology, which is forms a film on the skin and interacts with other ingredients.

This polysaccharide, thanks to its matrix-forming properties, acts as a barrier against the 3 types of pollution stress:

As a result, it limits the extra and intracellular induced damages: oxidative stress, inflammation, cellular and mitochondrial toxicity on the skin.

For all skin types. Gentle non-greasy cream that immediately hydrates the skin and creates, at the same time, a protective film for binding and retaining the moisture on its surface for long. Additionally, it works like a protective shield preventing the penetration of environment pollutants into the skin, reducing also the harm they cause.